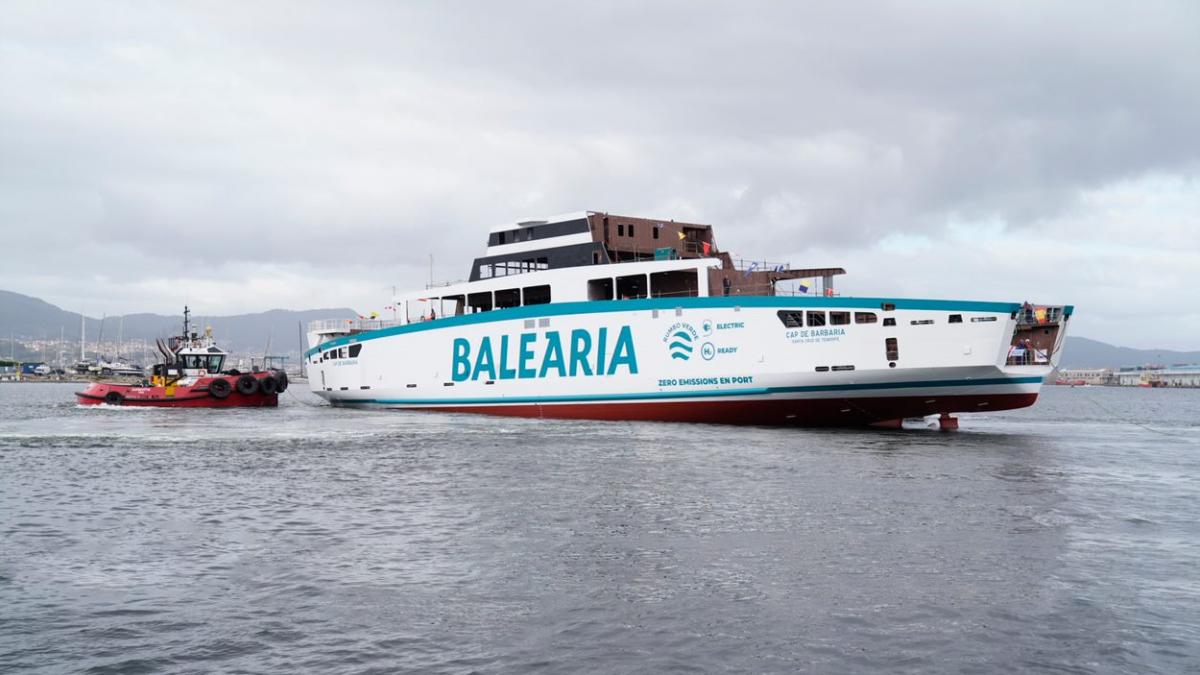 A godmother throwing a bottle of champagne that crashes against the hull of a ship, a baptism ceremony complete with its corresponding speeches, bagpipe music and a boat floating for the first time after leaving the shipyard slipway. Traditional and symbolic naval events for a ferry that the Baleària shipping company considers a further step in its future and an example of where the path of its fleet and the maritime sector in general is going to go: electrification and experimentation with new fuels such as green hydrogen for leave fuel oil behind definitively.

And it is that this afternoon, at the headquarters of the Armón shipyards in Vigo, the Cap of Barbariathe most modern in the fleet of this Dénia-based shipping company, a ship that has been specifically designed to navigate between Eivissa and Formentera. “We are fixated on innovating. We see and learn what is done around the world in our sector and then we apply everything we learn in our company.

The point is to prove it,” he told The vanguard Adolfo Utor, president and owner of a shipping company that currently has 29 ships and was looking forward to the thirtieth. “This is going to be the most sustainable of the fleet, another of our goals for years. It will have zero emissions during its stays in port, approaches and maneuvers in the docks”, he pointed out.

Zero emissions near and in port

Utor refers to the operation with electric propulsion at times when the Cap of Barbaria is approaching the ports of La Savina and Eivissa. In addition, within these Ports de Balears facilities, it will carry out docking, undocking and stay maneuvers with zero gas and smoke emissions. To achieve this, the ship has a state-of-the-art energy storage system made up of continuously recharged lithium batteries. These will allow you to have a dozen hours of autonomy in port.

On the other hand, the ferry has also been equipped with a ground connection socket. This is how it is prepared for the Cold Ironing system. This will also prevent polluting emissions from fossil fuel gases and engine noise. The technological strategy of “plugging in” ships is under development in the Spanish port system and the electrification of docks to which they will be connected during stopovers is contemplated. “Shipping companies have to meet deadlines with very demanding regulations for decarbonisation in the sector. With a ship that will be built in 2022 and will enter into commercial service in a few months, we had to take advantage of all the existing advances, apply them and leave it ready for possible improvements in the future”, indicated the president of Baleària while staring at his floating ship already in the waters of the Vigo estuary.

Also watching this scene were, institutionally, Marta Fernández-Tapias, delegate of the Xunta de Galicia, Elena Espinosa, former minister and today councilor for economy and business of Vigo, Ana Núñez, deputy director of the General Directorate of the Merchant Marine and Jesús Vázquez, president of the city’s port authority, among others.

Alongside politicians, businessmen and senior officials, Andrea Romero Escandell, an athlete from Formentera who has been standing out in recent seasons and who, at the age of 23, has already acted as godmother of a boat with great emotion after the surprising proposal of the shipping company. The baptized will be a ferry that Romero will sail frequently to return home from the beginning of summer 2023, when she the Cap of Barbariawhich is the name of one of the iconic points of Formentera, with its famous lighthouse and sunsets that are a reason for pilgrimage there, covers the eleven miles that separate the ports of both islands several times a day.

It will make the journey between the two islands in 60 minutes, the same time needed by the ship it replaces

The new 82-meter-long ferry will cover the distance, sailing mostly through the Freus area and the Salinas de Eivissa y Formentera natural park, a much-appreciated natural area that has been officially protected for two decades. On board it will be able to carry 390 passengers and has a 240 linear meter hold, a measure by which the capacity of garages on ferries and ro-ro ships is calculated. This implies that in addition to cars, bicycles or motorcycles, you can take up to 14 trucks on board to supply Formentera, an island that has these ships as an umbilical cord with the world.

The design of the vessel built in Galicia is a double bow with ramps at both ends. This facilitates loading and unloading: the vehicles always get on and off the ship without having to carry out any extra maneuvers. This allows the stopovers to be shorter, which is essential on the smaller island, which has a very tight berthing line and high demand in the high season months. “We still have a lot of work ahead of us. The ship must be equipped with everything that is needed for passenger comfort, although we are very proud of the work already done and also for being the co-stars of such an innovative ship that marks history in the Spanish naval sector, both in construction as in the operation”, Laudelino Alperi, CEO of Astilleros Armón, told this medium.

travel in one hour

As soon as it is operational, the Cap of Barbaria will replace the Posidoniaa ferry that during the last decade has been an important protagonist of the inter-island bridge, transporting practically everything conceivable and necessary to Formentera. This is also a highly appreciated boat among those who prefer to travel more slowly, since, like the new vessel, she will take about 60 minutes, twice as long as the rapids that cover the line.

“The time of the crossing is something that does not escape us. In recent seasons we are seeing that passengers once again appreciate calm navigation and the enjoyment of the landscape at a speed of about 12 or 13 knots. Now with this new ship they are going to enjoy it better, because it will be specially prepared for it: they will enjoy the sea and the landscapes with open spaces, comfort and good vibes”, commented the owner of the new ship enthusiastically while observing every detail of the design of a ship that his company not only sees as mere maritime transport, but as a testing laboratory for the use of green hydrogen on a small scale.

Baleària’s plan is to learn about the use of this fuel in a real project and apply this knowledge in the future, when a more developed and stable transport and storage system is available than the current compressed hydrogen, a transition fuel such as LNG or Liquefied Natural Gas that has already been used by several ships in its fleet.