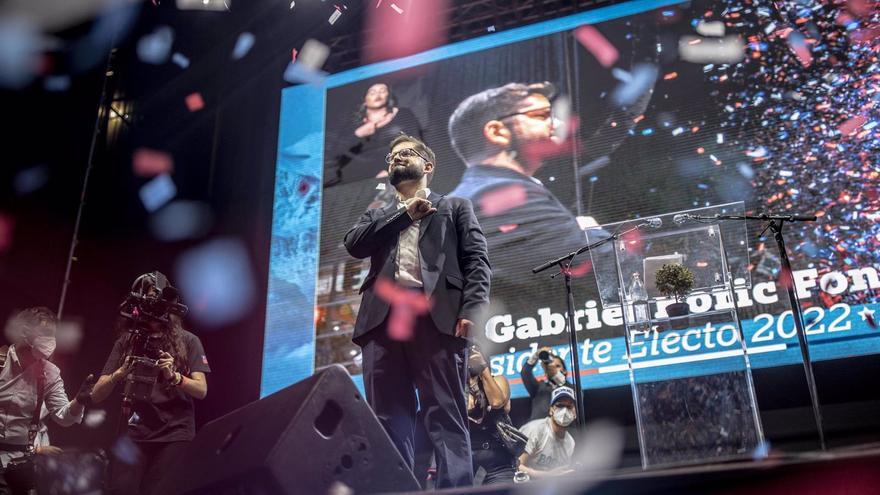 “Doubt must follow conviction like a shadow.” The phrase of Albert Camus accompanies Gabriel Boric on his Twitter account as a creed. He is not the only leftist who admires the author of Plaguebut he is the first to have an extraordinary date with Chilean history at the age of 36. This Friday at noon assumes the presidency of that country. Never before has a head of state entered the Palacio de la Moneda so young. His arrival in the Government is the result of a social outburst, in November 2019. Boric, a member of the Broad Front, first needed an alliance with the communist party to compete at the polls. But it was his electoral understanding with part of the center-left that prevented the victory of the extreme right in the second round in December.

He has decided to live in a modest house, close to the Executive headquarters, as a clear gesture of political and cultural renewal. From the hand of Boric comes a generation forged in the student and social protests. He has an eye on the past – the figure of Salvador Allende is the object of contained reverence – but an agenda for the future that connects with the urgencies of the present. The government, with a female majority in the cabinet of ministers, he must face a host of internal challenges. It will have to carry out an ambitious program, which includes a tax reform, greater benefits for the hardest hit sectors, as well as daring environmental and gender amendments, in a global context saturated with new dangers due to Russian invasion of Ukrainewhich Boric strongly condemned. Chile is an importer of gas and oil. The world rise in fuel prices creates an additional and unforeseen problem.

The Executive will be forced to launch its agenda no majority in either house of Congress and under the watchful eye of the markets. Despite these limitations, and the decision not to speed up the times, the expectation of changes it is so high that it puts the Government with its guard up from the start. “Nobody can guarantee less conflict in the streets&rdquor ;, acknowledged Giorgio Jackson, Boric’s student struggle partner and since this Friday Secretary General of the Presidency. The first measure that the new authorities will take will be to immediately withdraw the 139 lawsuits that the outgoing government filed against Chileans who participated in the protests.

Sebastian Pinera He leaves the presidency with sorrow and without an iota of the glory that he had imagined for his second administration. Before the protests flooded the big cities, he believed that Chile was an exception to the rule of regional frustrations. The economy did not stop growing, but successive governments had not done enough to reduce the matrix of inequality in a country where the richest 1% accumulates 49.6% of the wealth. The so-called “blowout” turned the country upside down. Demands in favor of a more equitable society and against the negative effects of the privatization of education, health, pensions and water intensified.

The collective desire for transformations displaced the right. The constituent Assembly finalizes the drafting of the new Magna Carta without the conservative spectrum being able to veto its initiatives. The 154 conventional must work piecemeal to reach July with the finished text. A strong progressive Constitution is expected. The new state will beregional, multinational and intercultural” and will incorporate new rights. Before leaving, Piñera asked the constituents to moderate their “founding eagerness.” The Magna Carta must be validated in a new popular consultation. Its rejection would represent a serious defeat for the incoming government.

Consolidating a global and collaborative vision is essential to sustain fluid diplomatic relations. Today we meet with representatives of different nations to move forward on that path. Thanks to all the authorities for accompanying us prior to assuming the presidency. pic.twitter.com/rxJC0gBGw0

Boric receives a Chile whose GDP fell by 5.8% during the first year of the pandemic, grew by almost 12% in 2021 and this year should increase by another 3.5%. Although the economy has shown signs of recovery, some Chileans are precarious. The pandemic caused a jump in overall poverty from 8.5% to 10.8%, according to the World Bank. The country has experienced an unprecedented growth of informal indebtedness. 30% of national households have some kind of financial commitment of this type.

On the other hand, the great fortunes They increased their profits by 73% while covid-19 circulated. They now collectively own $40.3 billion. Andronicus Luksicone of the richest men in Chile, said hours before Boric’s inauguration: “changes require time, they are not promised, but rather they are done responsibly.”

Other matters will require the Government’s immediate attention. On one side, the migration crisis in northern chilegateway for especially Venezuelan immigration and, at the same time, the trigger for growing xenophobic expressions. On the other hand, the problems of urban security. But perhaps one of Boric’s greatest challenges is to deactivate the conflict that the State maintains with the original Mapuche community, a complex solution despite all the advances contemplated by the future Magna Carta.

In the regional order, Boric is expected to have a degree of harmony with his Argentine neighbor Alberto Fernández and Bolivian Luis Arce Catacora. Possibly his greatest sympathies go to Brazil and Colombia, if Luiz Inacio Lula da Silva and Gustavo Petro they win the October and May elections, respectively. They are known in advance criticism of Venezuela and Nicaragua. This differential profile has been highlighted in Santiago by the Vice President of the Government of Spain, Yolanda Díaz. The young head of state represents “without a doubt” a new left in Latin America and that “It has nothing to do with it” with other experiences in Latin America.