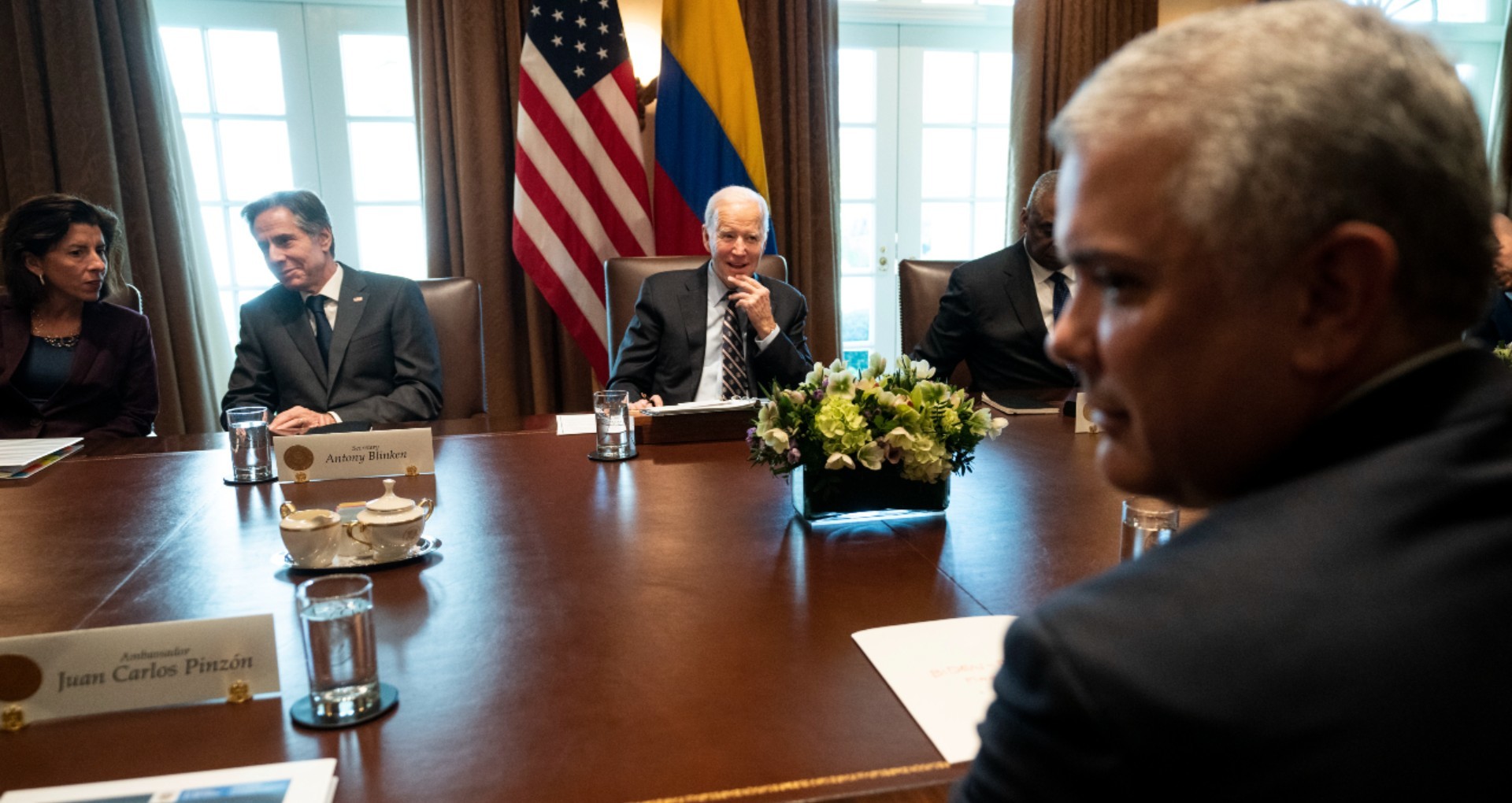 The president of the United States, Joe Biden, has transmitted this Thursday to his Colombian counterpart, Iván Duque, his intention to make this country a main non-NATO ally, a special status that entails economic and military privileges.

“Today I am proud to announce that I intend to designate Colombia as a main non-NATO ally,” Biden said in the meeting he held with Duque at the White House, in the first official meeting between the two.

“That is exactly what you are, a great, great non-NATO ally. This is a recognition of the unique and close relationship between our countries,” said the US president.

Biden has stressed that “the relationship between the US and Colombia is the basis for security and prosperity, and it will continue to grow more important.”

For its part, Duque has celebrated 200 years of bilateral ties and has highly valued the decision to designate Colombia as a main non-NATO ally.

“We are proud to commemorate 200 years of bilateral relations that today, thanks to the designation of Colombia as a Principal Non-NATO Ally, reach their highest level. We thank the President @POTUS, @JoeBidenhis administration and his country, for their valuable support. pic.twitter.com/nZasVEjNK8“

On Wednesday, Democratic Senators Bob Menéndez and Tim Kaine introduced a bill to designate Colombia as a major non-NATO ally.

They also talked about the migratory challenges

During the meeting they also discussed immigration challenges, an issue that Biden has considered cannot be resolved by a single nation. nor be solved in a single border: “We have to work together”.

In this sense, he has advanced that The US wants to sign a regional declaration on migration protection next june in Los Angeles during the Summit of the Americas.

On said summit, Duque has considered that it will be “a great opportunity to embrace the cause ‘Rebuild a better world'”, paraphrasing the motto of Biden’s domestic agenda, Build back better.

Duque has recalled that this cause is designed to “increase investment, job opportunities and to allow trade and investment to generate jobs.”

The Colombian president also thanked Biden for his work for being “one of the architects of Plan Colombia”: “it was a milestone in the bilateral relationship and allowed Colombia to face and defeat many challenges that we have had in recent decades”, he said .

Duque offers Biden oil after US contacts with Caracas

that plan was signed in 2000 with the objectives of combating the guerrillas and creating an anti-narcotics strategy in which the US invested close to 10,000 million dollars.

Regarding the pandemic, Duque thanked the US donation of an additional 2 million vaccines to your countrywhich “will be used to respond to the needs of many of the migrants in their country”.

“We tell Colombians 4️⃣ great achievements of the meeting held today in Washington, the Presidents of Colombia, @IvanDuque and the United States, @JoeBidenwith which 200 years of bilateral relations between the two countries are commemorated. ���������� pic.twitter.com/85xHvJfBK9“

During the meeting, both leaders They have also expressed their condemnation of the Russian invasion by Ukraine.

On the other hand, the president of Colombia has offered his American counterpart, Joe Biden, Colombian oil to stabilize energy pricesafter the United States maintained contacts with Venezuela on this matter.

“Colombia today is a country that has more capacity to supply hydrocarbons than Venezuela has,” Duque claimed at a press conference he offered at the Colombian Embassy in Washington after meeting with Biden.

The first meeting between the two leaders was marked by the visit last weekend of a US delegation to Venezuela to discuss with the government of Nicolás Maduro the release of US prisoners and the oil crisis unleashed by the Russian invasion of Venezuela. Ukraine.

Duque has confirmed that he spoke with Biden about the energy issue and told him that “Colombia is an actor that can contribute much more than Venezuela.”

You added that your country produces more than 890,000 barrels per daywhich has the goal of reaching one million and that Colombian crude currently represents 3% of imports from the United States.